Humans have used Cannabis (commonly known as marijuana, weed, or pot) for different purposes for thousands of years. The cannabis or hemp plant originally evolved in Central Asia before people introduced the plant into Africa, Europe and eventually the Americas. Hemp fiber was used to make clothing, paper, sails and rope, and its seeds were used as food. These early hemp plants had very low levels of tetrahydrocannabinol (THC), the chemical responsible for marijuana’s mind-altering effects. Scientists later discovered that THC had medicinal properties and also interacts with areas of the brain that are able to lessen nausea and promote hunger. In fact, drugs with THC are prescribed to treat nausea caused by cancer chemotherapy and loss of appetite in AIDs patients. Cannabis is still illegal under U.S. federal law; however, a number of states have legalized medicinal and/or recreational use of marijuana.1

Epidemiology of Cannabis Use

Is it possible for a person to become addicted to marijuana? Yes, about 1 in 10 marijuana users will become addicted. Synthetic marijuana comes with health risks that users rarely experience when using marijuana. Synthetic cannabinoids can be addictive. Overdoses can occur and can cause toxic reactions, raised blood pressure, reduced blood supply to the heart, kidney damage, seizures; Deaths can occur when dangerous synthetic opioids, such as fentanyl, are added without the user knowing. For people who begin using younger than 18, that number rises to 1 in 6. American Psychiatric Association’s Diagnostic Manual (DSM) has included marijuana use disorders since 1980. DSM-5 added Marijuana Withdrawal as a diagnosis. Figure 9 depicts the rate of addiction across a spectrum of psychoactive drugs.1,2 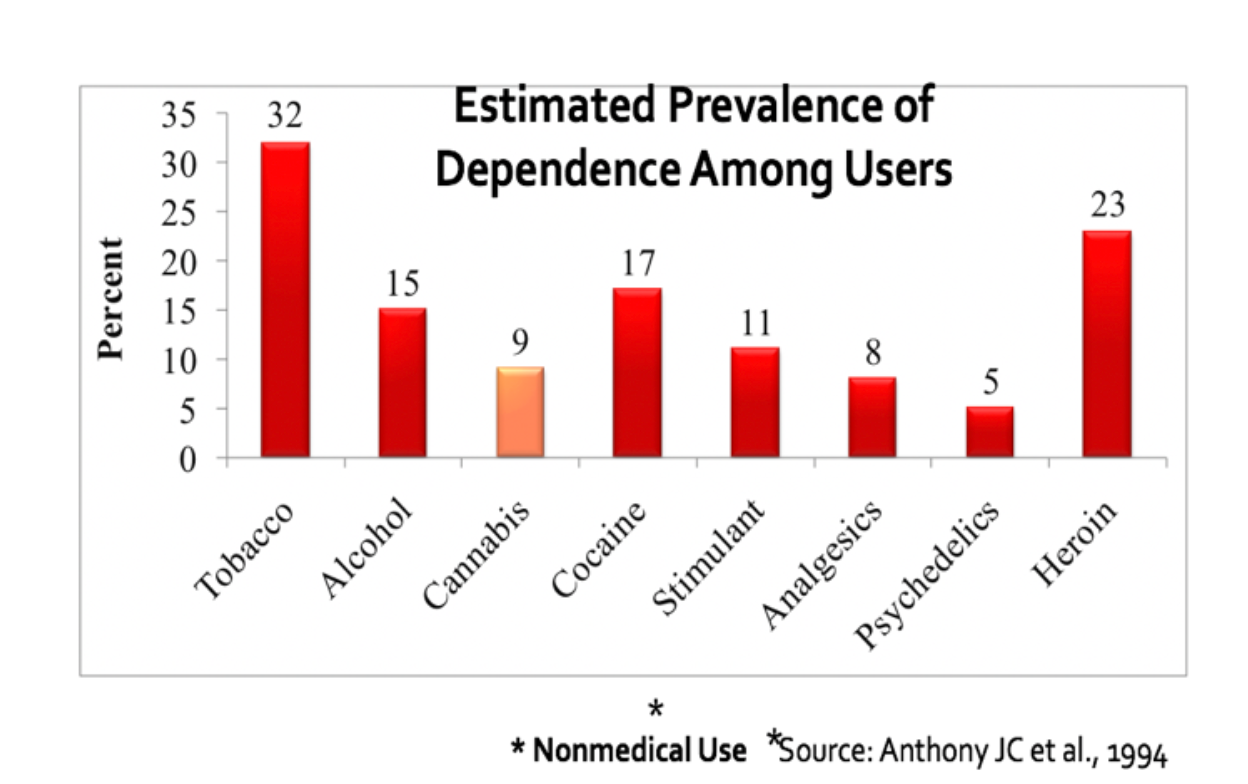 Pharmacology of Cannabis Use

Marijuana refers to the dried leaves, flowers, stems, and seeds from either of the two species of the plant: the Cannabis sativa or Cannabis indica. THC is the active ingredient and extracts can also be made from the cannabis plant. When a person smokes marijuana, THC quickly passes from the lungs into the bloodstream. The blood carries the chemical to the brain and other organs throughout the body. The body absorbs THC more slowly when the person eats or drinks it. In that case, they generally feel the effects after 30 minutes to 1 hour. THC acts on specific brain cell receptors that ordinarily react to natural THC-like chemicals. These natural chemicals play a role in normal brain development and function. Marijuana over activates parts of the brain that contain the highest number of these receptors. This causes the "high" that people feel.

People often use the words “cannabis” and “marijuana” interchangeably, but they don’t mean exactly the same thing.

Blunts-emptied cigars that have been partly or completely refilled with marijuana.

Vaporizers-devices pull the active ingredients from the marijuana and collect their vapor in a storage unit, then the vapor, not the smoke, is inhaled.

Edibles-marijuana mixed in food such as brownies, cookies, or candy, or brew it as a tea.

Smoking THC-rich resins extracted from the marijuana plant is on the rise. People call this practice dabbing. These extracts come in various forms, such as:

These extracts can deliver extremely large amounts of THC to the body, and their use has sent some people to the emergency room.

Is it possible to “overdose” or have a “bad reaction” to marijuana? A fatal overdose is unlikely, but that doesn’t mean marijuana is harmless. The signs of using too much marijuana are similar to the typical effects of using marijuana but more severe. These signs may include extreme confusion, anxiety, paranoia, panic, fast heart rate, delusions or hallucinations, increased blood pressure, and severe nausea or vomiting. In some cases, these reactions can lead to unintentional injury such as a motor vehicle crash, fall, or poisoning. Other effects include altered senses (for example, seeing brighter colors), altered sense of time, changes in mood, impaired body movement, difficulty with thinking and problem-solving, impaired memory, hallucinations (when taken in high doses), delusions (when taken in high doses), psychosis (risk is highest with regular use of high potency marijuana)

Among the known or suspected chronic effects of marijuana are memory impairment and slowness of learning, impaired lung function similar to that found in cigarette smokers, risk of cancer and other lung disease with extended use, decreased sperm count and sperm motility, interference with ovulation and pre-natal development, impaired immune response, and possible adverse effects on heart function.4,5