Historically, for thousands of years, from renaissance to contemporary era, people knew opium as a cure for all maladies. Wounded soldiers were allowed to abuse the drug in the battle fields. By 1830s, one third of all lethal drug overdose was due to opium.  In 1805, morphine was isolated from opium, and in 1952 it was synthesized. Subsequently, manufacturing of synthetic derivatives-called opioids, including heroin ushered in the era of widespread use and abuse. The recognition of pain as another vital sign led to the unbridled prescription of scheduled medicines, particularly the opiates.  In the late 1990s, pharmaceutical companies reassured the medical community that patients would not become addicted to opioid pain relievers and healthcare providers began to prescribe them at greater rates. Increased prescription of opioid medications led to widespread misuse of both prescription and non-prescription opioids before it became evident that these medications could indeed be highly addictive.1

Opioid Epidemic in the USA

Opioids are a class of drugs that include the illegal drug heroin, synthetic opioids such as fentanyl, and pain relievers available legally by prescription, such as oxycodone, hydrocodone, codeine, morphine, and many others. Opioid medications are prescribed principally for pain relief. Because they have the potential for abuse and addiction, their use is regulated by the Controlled Substances Act in the United States and by similar statutes in other countries. Prescribed opioids are subject to misuse and addiction. Clinicians and other health care personnel with access to these medications are at risk of misuse of these and other medications classified as controlled substances.   Prescription opioid pain medicines resulted in 2.1 million people being diagnosed to have a substance use disorder in 2016.  The number of overdoses linked to prescribed opioids has been increasing at an alarming rate.  As people look for cheaper substitutes in the streets,  there is a rise in heroin use and heroin use disorder. More than half a million people had a heroin use disorder in 2016, and more than 15,000 Americans died of heroin overdose in 2016.  Intravenous drug injection, including that of heroin and other addictive substances is associated with increased spread of infectious diseases, including HIV and hepatitis C. According to the  CDC, which  has been tracking data on all opioid overdoses, there are three distinct waves of the crisis: 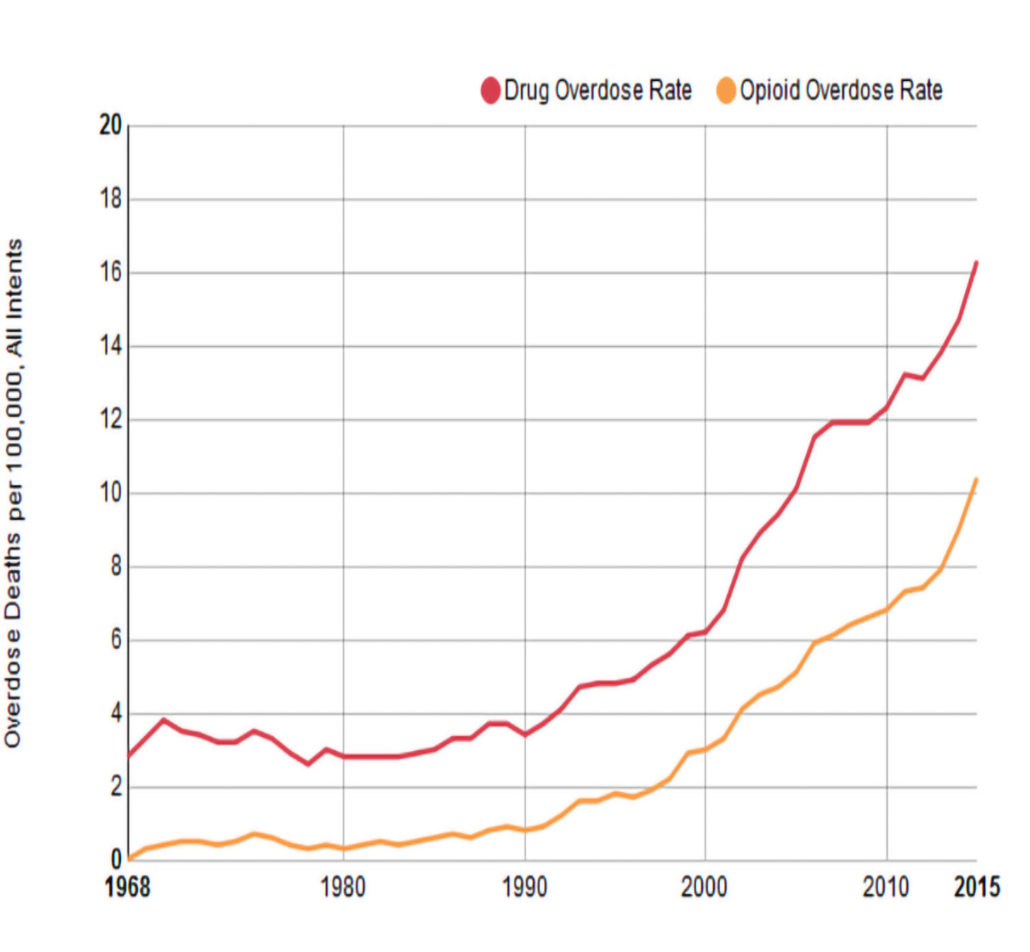 In 2017, HHS declared a public health emergency and announced a 5-Point Strategy To Combat the Opioid Crisis. Figure 7 depicts the US opioid epidemic by the numbers.  The toll of the opioid epidemic on human lives and its multilevel impact on the individual, family, and the community calls for a sustained response from all sectors, institutions and the society at large.

In 1914,  the US approved the Harrison Narcotics Tax Act, a federal law that regulated and taxed the production, importation, and distribution of opiates and coca products.1

Opium is the dried powdered mixture of 20 alkaloids obtained from the unripe seed capsules of the poppy. Opiate refers to a subclass of opioids consisting of alkaloid compounds that occur naturally in the opium poppy, including morphine and codeine.  Opioid –  refers to natural and synthetic substances that act at one of the three main opioid receptor systems (mu, kappa, delta).

•Intranasal use – "snorting" or "sniffing"

•Intravenous use – "shooting up" or "mainlining"

Morphine- morphine is a major active ingredient in opium. The German pharmacist Friedrich Serturner isolated Morphine in 1803. Sertürner originally named the substance morphium after the Greek god of dreams, Morpheus, as it has a tendency to cause sleep. Morphine was more widely used after the invention of the hypodermic syringe in 1853–1855. Heroin – Heroin is a derivative of morphine (Figure 8) discovered in 1874. Heroin is more likely than morphine to cause addiction and it is the opioid most commonly abused by injection. The chemical name for heroin is diacetylmorphine. Slang terms for heroin include dope, horse, smack, China white, junk, and tar. Endorphin – The term endorphin refers to a subclass of opioids consisting of endogenous peptides (i.e., peptides produced by the human body) that cause pain relief, including enkephalins, dynorphins, and beta-endorphins. Acupuncture may relieve pain by releasing endorphins. 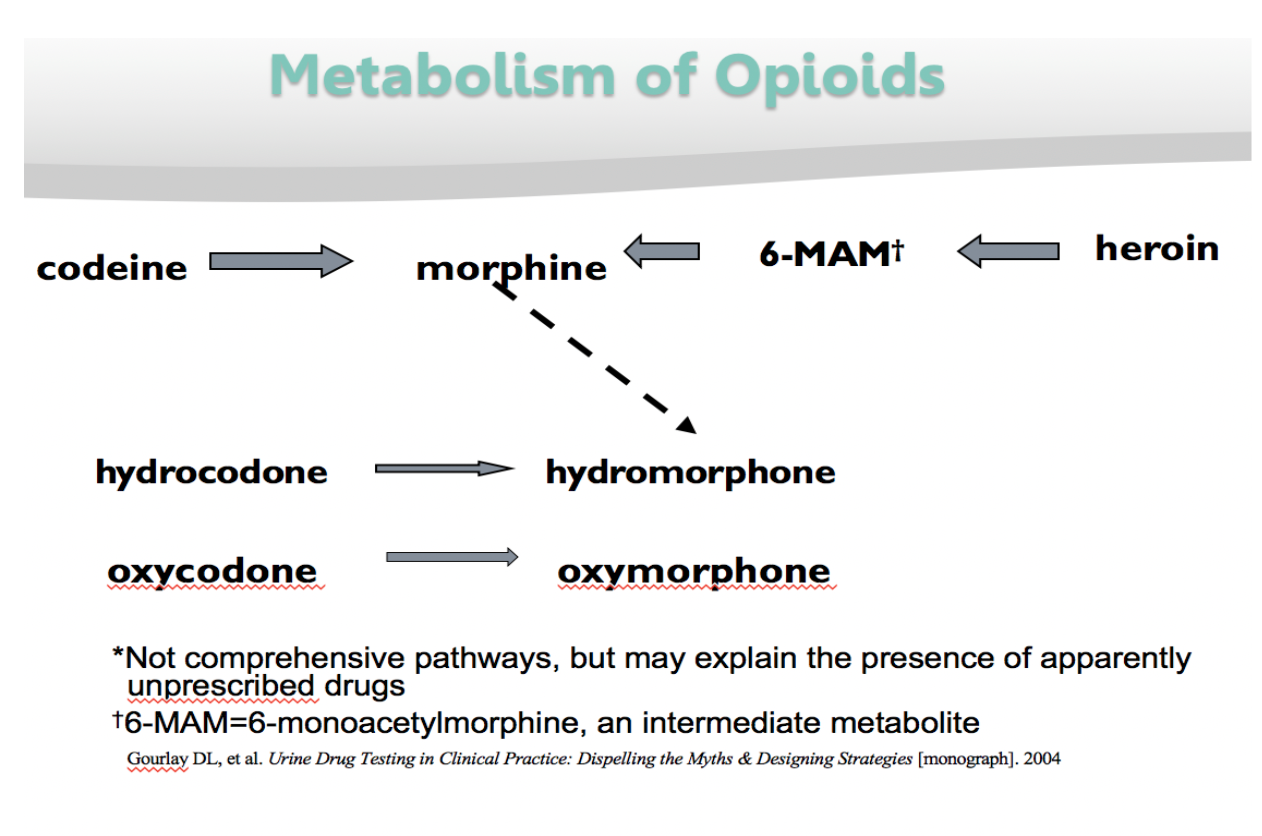 Opioids can depress breathing by changing neurochemical activity in the brain stem, where automatic body functions such as breathing and heart rate are controlled. They can reinforce drug taking behavior by altering activity in the limbic system, which controls emotions, and also can block pain messages transmitted through the spinal cord from the body. Detecting morphine abuse may be difficult, particularly in people with a prescription. There are several physical and behavioral signs of morphine abuse and morphine addiction that can be identified.

Behavioral Signs-common behavioral signs of morphine abuse include aggression, losing interest in hobbies, personality changes, dramatic changes in priorities, separation from loved ones, poor judgment, problems concentrating or focusing, neglecting daily responsibilities, Mood swings, and depression. With ongoing usage, a tolerance can develop to some of the side effects.

Tolerance-Long-term use of prescription opioids, even as prescribed by a doctor, can cause some people to develop a tolerance, which means that they need higher and/or more frequent doses of the drug to get the desired effects.

Dependence-Drug dependence occurs with repeated use, causing the neurons to adapt so they only function normally in the presence of the drug. The absence of the drug causes several physiological reactions, ranging from mild in the case of caffeine, to potentially life threatening, such as with heroin. Some chronic pain patients are dependent on opioids and require medical support to stop taking the drug.

Addiction-Drug addiction is a chronic disease characterized by compulsive, or uncontrollable, drug seeking and use despite harmful consequences and long-lasting changes in the brain. The changes can result in harmful behaviors by those who misuse drugs, whether prescription or illicit drugs.2-4

Although opioid use disorder is a medical condition, not all of the contributing factors are medical. By knowing the environmental factors that contribute to opioid misuse, Community Health Workers can help make the path to recovery easier for their clients. A non-judgmental attitude is critical for helping individuals with substance use disorders and for combatting stigma overall. Recovery is a team effort. Engage family members and loved ones for additional support. Community health workers are in a unique position to address some of the social determinants of opioid misuse. They can recognize opioid misuse in its early stages; help clients navigate the complex treatment system; break from societal stigma by being a non-judgmental source of support; and know and provide help on how to reduce harm among people struggling with opioid use as well use naloxone (Narcan, Evzio), a medication designed to rapidly reverse opioid overdose, to help persons who overdose opioids.5-8