At the conclusion of the chapter, students will be able to:

Behavioral neuropharmacology focuses on the study of how drugs affect human behavior (neuropsychopharmacology), including the study of how drug dependence and addiction affect the human brain.  All psychoactive drugs act centrally (i.e. on the brain). Drugs affect neurotransmission in diverse ways. The vast majority of drug actions take place through direct effects on neurotransmission. Substance use disorders result from changes in the brain that can occur as a consequence of  repeated use of alcohol and/or other  drugs. WHO defines addiction to drug or alcohol as repeated use of a psychoactive substance(s)1 to the extent that the user (referred to as an addict,  or preferably person who uses a substance ) has the following manifestations: 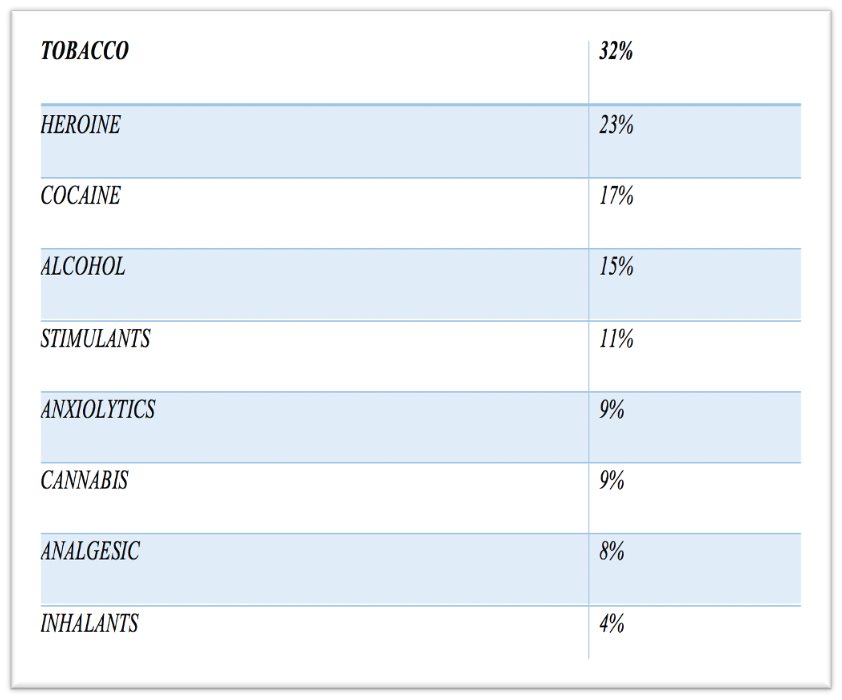 Figure 2: Probability of becoming dependent when you have tried a substance at least once.

Changes to two other brain areas, the extended amygdala and the prefrontal cortex, help explain why stopping use can be so difficult for someone with a severe substance use disorder. The extended amygdala controls our responses to stress. If dopamine bursts in the reward circuitry in the basal ganglia are like a carrot that lures the brain toward rewards, bursts of stress neurotransmitters in the extended amygdala are like a painful stick that pushes the brain to escape unpleasant situations. Together, they control the spontaneous drives to seek pleasure and avoid pain and compel a person to action.

In substance use disorders, however, the balance between these drives shifts over time. Increasingly, people feel emotional or physical distress whenever they are not taking the substance. This distress, known as withdrawal, can become hard to bear, motivating users to escape it at all costs. Withdrawal symptoms are symptoms that can occur after long-term use of a drug is reduced or stopped; these symptoms occur if tolerance to a substance has occurred and vary according to substance.  Note that many non-addictive drugs can cause tolerance,  sensitization, or dependence.  Therefore, tolerance, per se define addiction. Rather, addiction is caused by drug-induced changes in reward or reinforcement.

As a substance use disorder deepens in intensity, substance use is the only thing that produces relief from the bad feelings associated with withdrawal. And like a vicious cycle, relief is purchased at the cost of a deepening disorder and increased distress when not using. The person no longer takes the substance to “get high” but instead to avoid feeling low. Other priorities, including job, family, and hobbies that once produced pleasure have trouble competing with this cycle.3

Healthy adults are usually able to control their impulses when necessary, because these impulses are balanced by the judgment and decision-making circuits of the prefrontal cortex. Unfortunately, these prefrontal circuits are also disrupted in substance use disorders. The result is a reduced ability to control the powerful impulses toward alcohol or drug use despite awareness that stopping is in the person’s best long-term interest.

This explains why substance use disorders are said to involve compromised self-control. It is not a complete loss of autonomy—addicted individuals are still accountable for their actions—but they are much less able to override the powerful drive to seek relief from withdrawal provided by alcohol or drugs. At every turn, people with addictions who try to quit find their resolve challenged. Even if they can resist drug or alcohol use for a while, at some point the constant craving triggered by the many cues in their life may erode their resolve, resulting in a return to substance use, or relapse. 3

Many factors influence a person’s chance of developing a mental and/or substance use disorder. Effective prevention focuses on reducing those risk factors, and strengthening protective factors, that are most closely related to the problem being addressed.

Risk factors are characteristics at the biological, psychological, family, community, or cultural level that precede and are associated with a higher likelihood of negative outcomes.1

Individual-level risk factors may include a person’s genetic predisposition to addiction or exposure to alcohol prenatally.  Individual-level protective factors might include positive self-image, self-control, or social competence. Figure 3 depicts some of the risk and protective Factors for drug abuse and addiction. 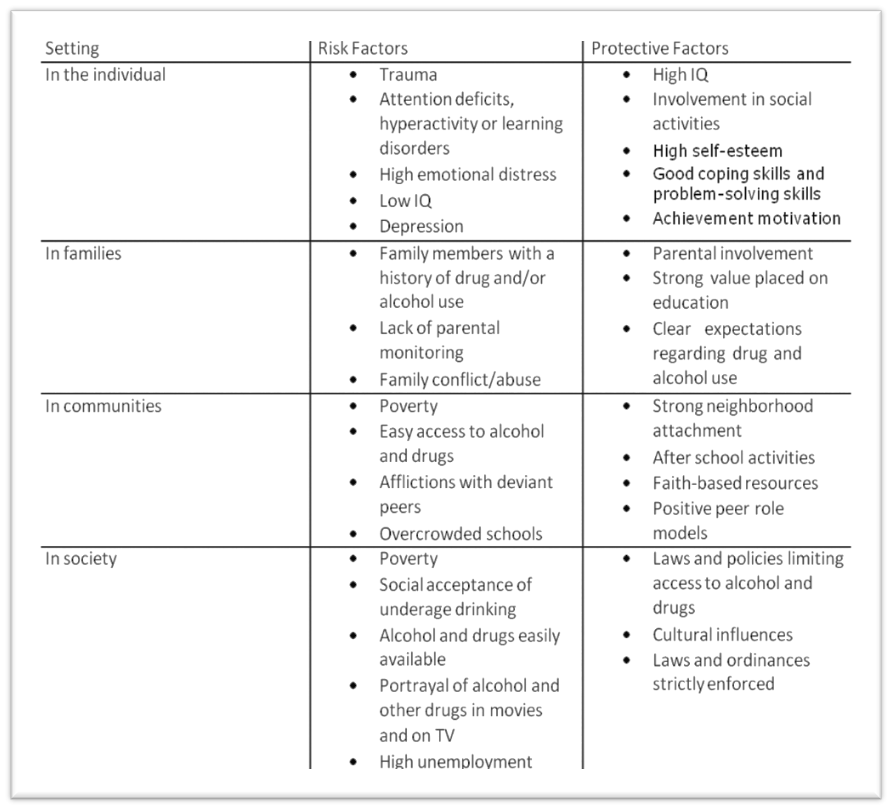 Prevention professionals should consider these key features of risk and protective factors when designing and evaluating prevention interventions. Then, prioritize the risk and protective factors that most impact your community. All people have biological and psychological characteristics that make them vulnerable to, or resilient in the face of, potential behavioral health issues. Because people have relationships within their communities and larger society, each person’s biological and psychological characteristics exist in multiple contexts.

A variety of risk and protective factors operate within each of these contexts. These factors also influence one another. Contributions to the disease of addiction are 50% genetic and 50% environmental, both of which act together to produce the addiction.  Risk factors for addiction include the agent, the environment, and the host (See Figure 4). Substantial evidence suggests both environmental and social factors can influence the. development of drug addiction. 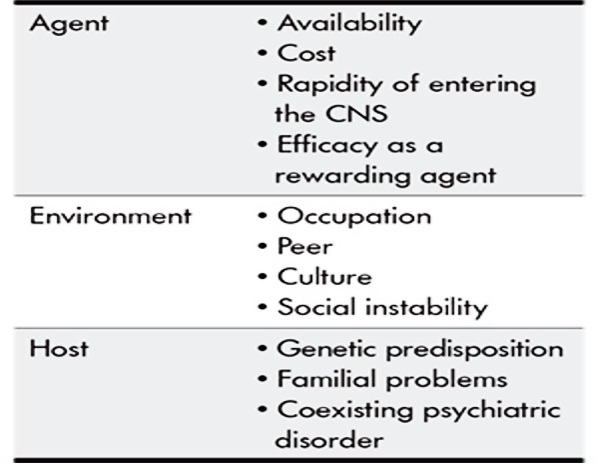 Targeting only one context when addressing a person’s risk or protective factors is unlikely to be successful, because people don’t exist in isolation. For example:

Risk and protective factors also tend to have a cumulative effect on the development—or reduced development—of behavioral health issues. Young people with multiple risk factors have a greater likelihood of developing a condition that impacts their physical or mental health; young people with multiple protective factors are at a reduced risk. These correlations underscore the importance of early intervention and  interventions that target multiple, not single, factors.4

The Controlled Substances Act (CSA) of 1970 places all substances which were in some manner regulated under existing federal law into one of five schedules.  This placement is based upon the substance’s medical use, potential for abuse, and safety or dependence liability. Schedule I drugs have the highest abuse potential and schedule V drugs represents the least potential for abuse (Drug Enforcement Administration.5

Schedule I drugs, substances, or chemicals are defined as drugs with no currently accepted medical use and a high potential for abuse. Some examples of Schedule I drugs are: heroin, lysergic acid diethylamide (LSD), marijuana (cannabis),  and ecstasy.

Schedule II drugs, substances, or chemicals are defined as drugs with a high potential for abuse, with use potentially leading to severe psychological or physical dependence. These drugs are also considered dangerous. Some examples of Schedule II drugs are cocaine, methamphetamine, methadone, oxycodone, fentanyl, and Ritalin

Schedule IV drugs, substances, or chemicals are defined as drugs with a low potential for abuse and low risk of dependence. Some examples of Schedule IV drugs are Xanax, Valium, Ambien, and Tramadol

Schedule V drugs, substances, or chemicals are defined as drugs with lower potential for abuse than Schedule IV and consist of preparations containing limited quantities of certain narcotics. Schedule V drugs are generally used for antidiarrheal, antitussive, and analgesic purposes.  Examples of Schedule V drugs are: Lomotil and Lyrica.