Alcohol, chemically known as ethanol, played many roles throughout history. Alcohols are consumed as beverages where the alcohols specifically consist of 3–40 percent of ethanol by volume. Alcohol used as an anti-freezing agent has a mix of a solution containing ethylene glycol dissolved in water. Alcohol is also used as an antiseptic agent, as fuels in the internal combustion engines, and as preservatives for the specimens in laboratories. An alcoholic beverage is considered a food, because it contributes energy to the diet (7 kcals/gram). A nutrient is a part of food that is used by our cells and metabolized by the body to make all the contributions that our body needs. Alcohol is not considered a nutrient, because it is not needed for the body’s normal functioning. Alcohol removes inhibition and it is considered a social stimulant.  Throughout history, alcohol has been used as a thirst quencher where water is unsafe and as an analgesic to treat aches and pains. Evidentially, beer recipes were found on Babylonian clay tablets thousands of years old. Alcohol was probably known as early as the Stone Age, ten thousand years ago. Probably the first wine was produced by accident through fermentation caused by wild yeast.  Beer production and consumption had to wait until establishment of agriculture. Alcoholic beverages provided a safe alternative to unsafe drinking water. Early alcoholic beverages had relatively low alcohol content, focused more on taste and thirst quenching.  In biblical narratives, drinking water was seldom mentioned whereas drinking wine and beer is and the Scriptures advise against heavy drinking. All ages, even children, drank wine and ale.1

Alcohol is nearly always drunk in the form of three major classes of alcoholic beverages: beer, wine, and hard liquor (aka distilled spirits). It is produced through fermentation and distillation.

Alcohol is produced from carbohydrates (CHO). The CHO must be simple sugar, such as maltose or glucose in order for the yeast to use it as food. If the CHO is a starch, such as that found in cereal grains (barley) it must be broken down to simpler forms, or malted. 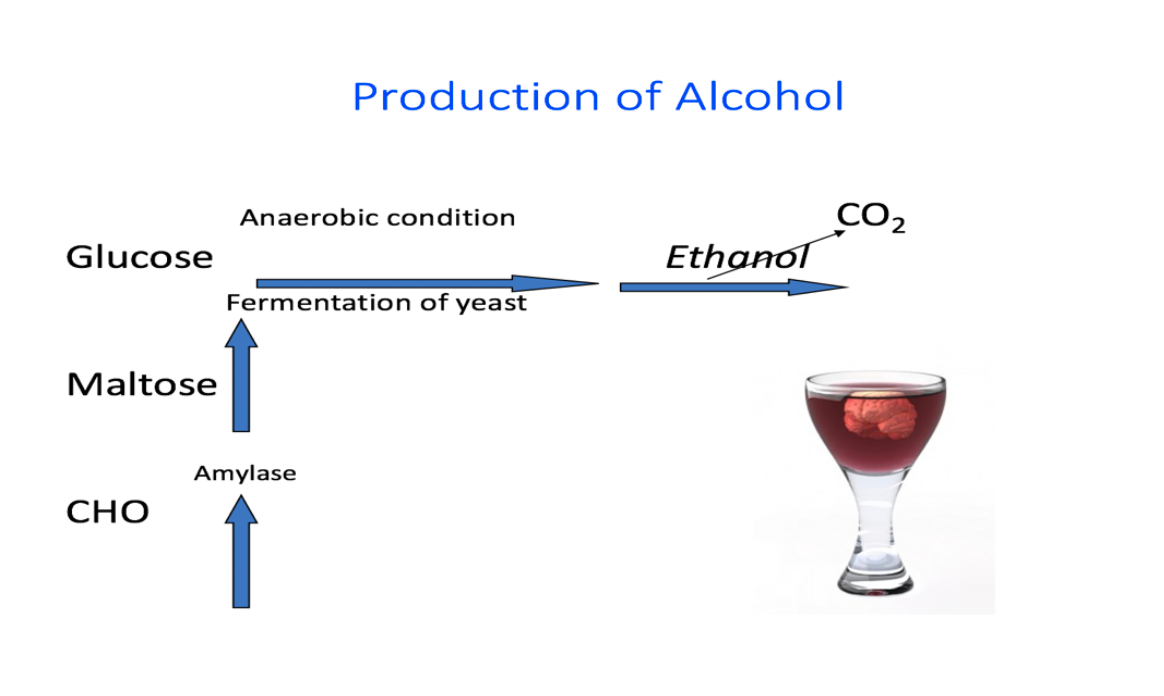 Beer is made from malted cereal grains, such as barley, flavored with hops and brewed by slow fermentation. The resulting carbon dioxide is used to carbonate the beer.

Distilled spirits such as whiskey, vodka, or gin are made by distilling the alcohol after fermentation. Distilling separates the alcohol from water and the alcohol is recovered. One method of classifying distilled liquors is as aged or unaged. Aging is the process of storing distilled spirits (or wines) in barrels for a specific period of time. The term age refers to the actual duration of storage, while maturity expresses the degree to which chemical changes occur during storage. The goal of maturation is to remove harsh flavors from the raw alcohol while adding distinct flavor characteristics found in the barrel's wood. Vodka, neutral spirits for use in a variety of products, most gins, and some rums and brandies are unaged. Aged products are predominantly whiskeys and most rums and brandies.

Alcohol content of a beverage is expressed by volume or by weight. Proof of an alcoholic beverage indicates percentage of alcohol content. In the United States, alcohol proof is defined as twice the percentage of Alcohol by volume (ABV).   ABV is a standard measure of how much alcohol (ethanol) is contained in a given volume of an alcoholic beverage (expressed as a volume percent).

Alcohol is considered a drug because it changes the physical & emotional state of a person.  Alcohol is classified as a depressant because it slows down the body systems.

Beauty is in the eye of the beer holder. 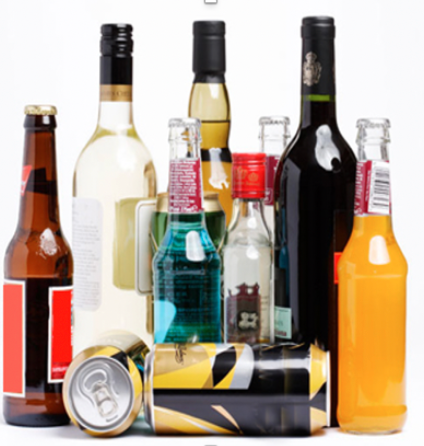 Consumption of Alcohol  and Heavy Drinking in the United States

Alcohol is classified as a depressant because it slows down the central nervous system. It  cause a decrease in motor coordination, reaction time and intellectual performance.  At high doses, alcohol  slows down the respiratory drastically and can cause a coma or death. Alcohol cannot be stored and has priority in metabolism. If taken with sedatives, alcohol and sedatives compete for the same metabolic pathways. Liver cannot metabolize the sedatives fast enough. Therefore,  it is particularly dangerous to mix alcohol with other depressants such as sleeping pills . Combining depressants multiplies the effects of both drugs (synergy) and can lead to memory loss, coma or death.

Absorption- Once ingested, a drink enters the stomach and small intestine, where small
blood vessels carry it to the bloodstream. Approximately 20% of alcohol is absorbed  through the stomach and most of the remaining 80% is absorbed through the small intestine. Then it is distributed to all tissues of the body. Rate of alcohol absorption varies according to each person’s physiological and  situational factors. Blood receives high   concentration of alcohol.  Blood Alcohol Concentration (BAC) refers to the percent of alcohol (ethyl alcohol or ethanol) in a person's blood stream. A BAC of  10% means that an individual's blood supply contains one-part alcohol for every 1000 parts blood.  Blood Alcohol  Concentration (BAC) equation including alcohol dose and time.  BAC also depends on  gender, body fat percentage, rate of alcohol metabolization. A social drinker who weighs 150 pounds with normal liver function metabolizes about 5-7 grams of alcohol per hour, about half a beer of ¼ of another drink.

When intake of alcohol exceeds liver’s ability to metabolize it, builds up in the bloodstream Breath analysis is a practical  method of measuring BAC.  Small percentage excreted in urine, sweat, expired air (levels in expired air correspond with blood alcohol content → Breathalyzer test).

Understanding the rate of metabolism is critical to understanding the effects of alcohol. In general, the liver can process one ounce of liquor (or one standard drink) in one hour. The liver cannot quicken the pace of metabolization.  If you consume more than this, your system becomes saturated, and the additional alcohol will accumulate in the blood and body tissues until it can be metabolized. This is why pounding shots or playing drinking games can result in high blood alcohol concentrations that last for several hours.

What is "one drink"?

Knowing how to count a standard drink is necessary for calculating blood alcohol concentrations. Too often, people underestimate how much they have had to drink because they aren't using standard measurements.

Beer; One drink = one 12-ounce beer. This is normal-strength beer (4% alcohol). Micro-brews and malt liquor have a higher percentage of alcohol (look at the label).

Liquor: One drink = 1.5 ounces of liquor (40% alcohol or 80 proof). This is how much whiskey, vodka, gin, etc. is in a measured mixed drink or in a "shot." Mixed drinks may not be measured and often contain far more than 1.5 ounces of alcohol.

The number of Americans drinking themselves to death has more than doubled over the last two decades.4 In 2017 alone, 2.6% of roughly 2.8 million deaths in the United States involved alcohol. According to the CDC, binge drinkers are consuming more alcohol than they ever before. The number of drinks they’ve knocked back spiked from 472 on average in 2011 to 529 in 2017, or a 12% increase.1-3

Alcohol abuse is defined as the persistent misuse of alcohol. Alcohol abuse is considered an alcohol use disorder (AUD). An alcohol use disorder occurs when a person’s drinking causes them any harm or distress, or legal, financial or social problems. AUD is defined as mild, moderate or severe based on the number of symptoms experienced. Alcohol contributes to the leading causes of death. Combined with tobacco, increases the risk for esophageal and oral cancer. The risk for heart disease, heart arrhythmia, hypertension, stroke, osteoporosis, brain damage, nutritional deficiencies, fetal damage, obesity, colorectal cancer, breast cancer, and other cancers.

Genetics of Alcohol Use Disorder(AUD)

Alcohol use disorder often seems to run in families, Genetics certainly influence our likelihood of developing AUD, genes are responsible for about half of the risk for AUD. The risk is increased fourfold in children of alcoholics. However, genes alone do not determine whether someone will develop AUD. Environmental factors, as well as gene and environment interactions account for the remainder of the risk. Environmental factors can alter the expression of our genes. This field is called epigenetics. Research helps understand more and more how epigenetics can affect our risk for developing AUD.

The long-term effects of alcohol abuse include alcoholism, liver disease, pancreatitis, malnutrition and cancer. An alcohol addiction treatment program such as Alcoholics Anonymous (AA), a global community-based program, may help a person quit alcohol and avoid some of the long-term effects it can have.

There is a strong association between excessive alcohol consumption and engaging in physically or sexually aggressive and /or violent behavior. Alcohol and other drugs of abuse may act on brain mechanisms that cause a high-risk individual to engage in aggressive and violent behavior. The co-occurrence of alcohol use and violence is especially prevalent among men 18 to 30 years old. Alcoholism negatively impacts a person’s sense of self-confidence and erodes their self-esteem. When concurrent mental illness, alcohol abuse can make the situation far worse. It can cause a dramatic increase in the intensity of certain mental health symptoms and can put people at risk for a potentially fatal overdose if they mix pharmaceutical medications with alcohol.

There is no amount of alcohol that's known to be safe to consume during pregnancy. Consumption of alcohol during pregnancy, puts the baby at risk of fetal alcohol syndrome (FAS). FAS is a condition in a child that results from alcohol exposure during the mother's pregnancy. FAS causes brain damage and growth problems and is associated with continued physical problems and below-average intellectual functioning later in childhood. The physical abnormalities may consist of gross deformities that are identifiable at birth. The problems caused by fetal alcohol syndrome vary from child to child, but defects caused by fetal alcohol syndrome are not reversible.

11 Symptoms of Alcohol Use Disorder

The presence of at least two of these symptoms indicates an alcohol use disorder (AUD). The severity of an AUD is graded mild, moderate, or severe:

Mild: The presence of 2 to 3 symptoms.

Moderate: The presence of 4 to 5 symptoms.

Severe: The presence of 6 or more symptoms.