Unless otherwise noted, this work is licensed under a Creative Commons Attribution-NonCommercial-ShareAlike 4.0 International License.

A solution is a homogeneous mixture—a mixture of two or more substances that are so intimately mixed that the mixture behaves in many ways like a single substance. Many chemical reactions occur when the reactants are dissolved in solution. In this chapter, we will introduce concepts that are applicable to solutions and the chemical reactions that occur in them.

One important concept of solutions is in defining how much solute is dissolved in a given amount of solvent. This concept is called concentration. Various words are used to describe the relative amounts of solute. Dilute describes a solution that has very little solute, while concentrated describes a solution that has a lot of solute. One problem is that these terms are qualitative; they describe more or less but not exactly how much.

Table 10.2 Solubilities of Some Ionic Compounds

In some circumstances, it is possible to dissolve more than the maximum amount of a solute in a solution. Usually, this happens by heating the solvent, dissolving more solute than would normally dissolve at regular temperatures, and letting the solution cool down slowly and carefully. Such solutions are called supersaturated solutions and are not stable; given an opportunity (such as dropping a crystal of solute in the solution), the excess solute will precipitate from the solution.

The answer is intermolecular interactions. The intermolecular interactions include London dispersion forces, dipole-dipole interactions, and hydrogen bonding (as described in Chapter 3 "Solids and Liquids"). From experimental studies, it has been determined that if molecules of a solute experience the same intermolecular forces that the solvent does, the solute will likely dissolve in that solvent. So, NaCl—a very polar substance because it is composed of ions—dissolves in water, which is very polar, but not in oil, which is generally nonpolar. Nonpolar wax dissolves in nonpolar hexane but not in polar water. This concept leads to the general rule that “like dissolves like” for predicting whether a solute is soluble in a given solvent. However, this is a general rule, not an absolute statement, so it must be applied with care.

which can be simplified as

As with any mathematical equation, if you know any two quantities, you can calculate the third, unknown, quantity.

For example, suppose you have 0.500 L of solution that has 0.24 mol of NaOH dissolved in it. The concentration of the solution can be calculated as follows:

The concentration of the solution is 0.48 M, which is spoken as “zero point forty-eight molarity” or “zero point forty-eight molar.” If the quantity of the solute is given in mass units, you must convert mass units to mole units before using the definition of molarity to calculate concentration. For example, what is the molar concentration of a solution of 22.4 g of HCl dissolved in 1.56 L? First, convert the mass of solute to moles using the molar mass of HCl (36.5 g/mol):

Now we can use the definition of molarity to determine a concentration:

The definition of molarity can be used to determine the amount of solute or the volume of solution, if the other information is given. Example 4 illustrates this situation.

If you need to determine volume, remember the rule that the unknown quantity must be by itself and in the numerator to determine the correct answer. Thus rearrangement of the definition of molarity is required.

A similar unit of concentration is molality (m), which is defined as the number of moles of solute per kilogram of solvent, not per liter of solution:

Mathematical manipulation of molality is the same as with molarity.

Another way to specify an amount is percentage composition by mass (or mass percentage, % m/m). It is defined as follows:

It is not uncommon to see this unit used on commercial products (Figure 10.1 "Concentration in Commercial Applications").

There are similar definitions for parts per million and parts per billion:

and Each unit is used for progressively lower and lower concentrations. The two masses must be expressed in the same unit of mass, so conversions may be necessary.

As with molarity and molality, algebraic rearrangements may be necessary to answer certain questions.

In both dilution and concentration, the amount of solute stays the same. This gives us a way to calculate what the new solution volume must be for the desired concentration of solute. From the definition of molarity,

we can solve for the number of moles of solute:

moles of solute = (molarity)(liters of solution)

A simpler way of writing this is to use M to represent molarity and V to represent volume. So the equation becomes

as the dilution equation. The volumes must be expressed in the same units. Note that this equation gives only the initial and final conditions, not the amount of the change. The amount of change is determined by subtraction.

Concentrating solutions involves removing solvent. Usually this is done by evaporating or boiling, assuming that the heat of boiling does not affect the solute. The dilution equation is used in these circumstances as well.

Of course, once quantities in moles are available, another conversion can give the mass of the substance, using molar mass as a conversion factor.

If we wanted to know what volume of 0.555 M CaCl2 would react with 1.25 mol of AgNO3, we first use the balanced chemical equation to determine the number of moles of CaCl2 that would react and then use concentration to convert to liters of solution:

This can be extended by starting with the mass of one reactant, instead of moles of a reactant.

We have used molarity exclusively as the concentration of interest, but that will not always be the case. The next example shows a different concentration unit being used.

Before we introduce the first colligative property, we need to introduce a new concentration unit. The mole fraction of the ith component in a solution, χi, is the number of moles of that component divided by the total number of moles in the sample:

(χ is the lowercase Greek letter chi.) The mole fraction is always a number between 0 and 1 (inclusive) and has no units; it is just a number.

Two colligative properties are related to solution concentration as expressed in molality. As a review, recall the definition of molality:

The change in boiling point (ΔTb) is easily calculated:

The equation to calculate the change in the freezing point for a solution is similar to the equation for the boiling point elevation:

Freezing point depression is one colligative property we use in everyday life. Many antifreezes used in automobile radiators use solutions that have a lower freezing point than normal so that automobile engines can operate at subfreezing temperatures. We also take advantage of freezing point depression when we sprinkle various compounds on ice to thaw it in the winter for safety (Figure 10.2 "Salt and Safety"). The compounds make solutions that have a lower freezing point, so rather than forming slippery ice, any ice is liquefied and runs off, leaving a safer pavement behind.

Consider the system in Figure 10.3 "Osmosis"a. A semipermeable membrane separates two solutions having the different concentrations marked. Curiously, this situation is not stable; there is a tendency for water molecules to move from the dilute side (on the left) to the concentrated side (on the right) until the concentrations are equalized, as in Figure 10.3 "Osmosis" (b). This tendency is called osmosis. In osmosis, the solute remains in its original side of the system; only solvent molecules move through the semipermeable membrane. In the end, the two sides of the system will have different volumes. Because a column of liquid exerts a pressure, there is a pressure difference Π on the two sides of the system that is proportional to the height of the taller column. This pressure difference is called the osmotic pressure, which is a colligative property.

(a) Two solutions of differing concentrations are placed on either side of a semipermeable membrane. (b) When osmosis occurs, solvent molecules selectively pass through the membrane from the dilute solution to the concentrated solution, diluting it until the two concentrations are the same. The pressure exerted by the different height of the solution on the right is called the osmotic pressure.

The osmotic pressure of a solution is easy to calculate: 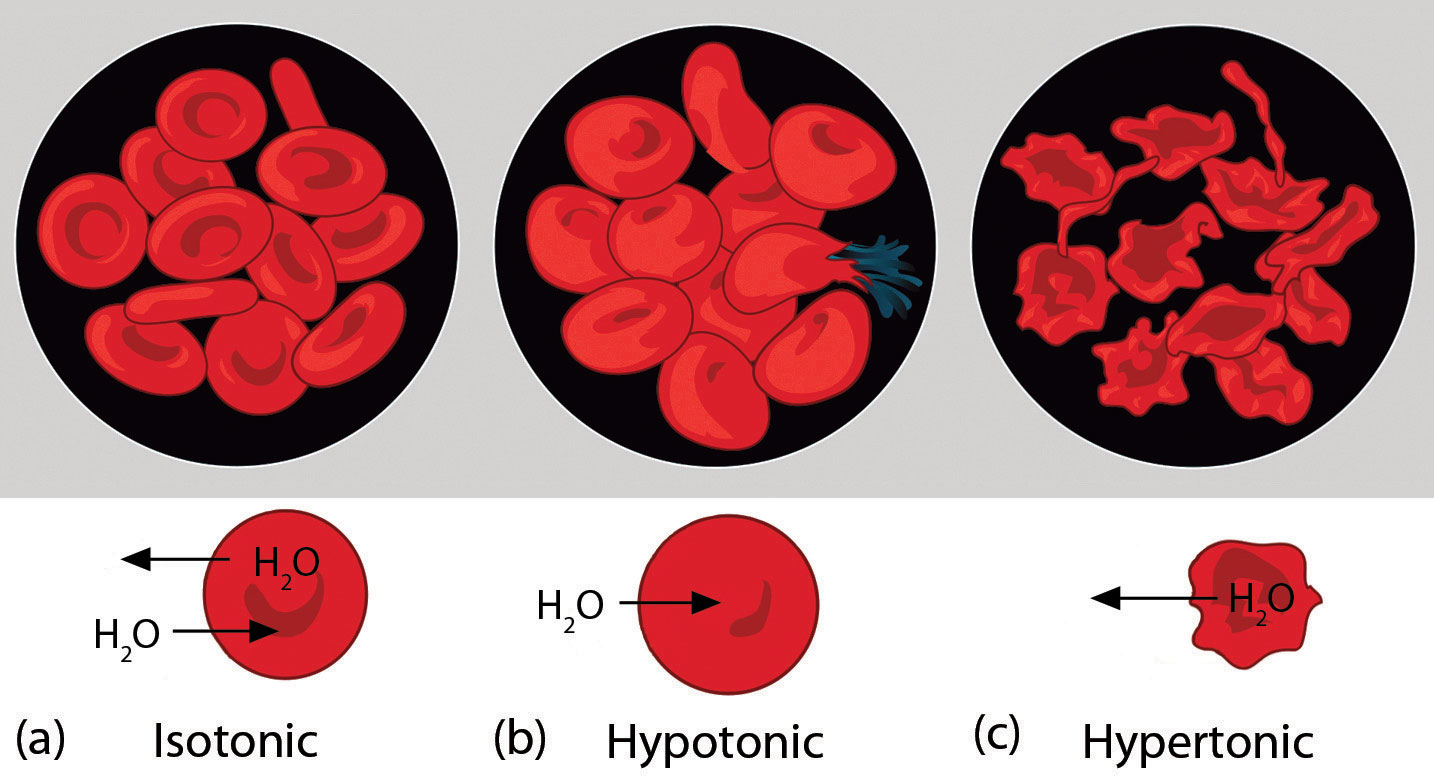 Osmotic pressure is also the reason you should not drink seawater if you’re stranded in a lifeboat on an ocean; seawater has a higher osmotic pressure than most of the fluids in your body. You can drink the water, but ingesting it will pull water out of your cells as osmosis works to dilute the seawater. Ironically, your cells will die of thirst, and you will also die. (It is OK to drink the water if you are stranded on a body of freshwater, at least from an osmotic pressure perspective.) Osmotic pressure is also thought to be important—in addition to capillary action—in getting water to the tops of tall trees.

There is a complicating factor: ionic solutes separate into ions when they dissolve. This increases the total number of particles dissolved in solution and increases the impact on the resulting colligative property. Historically, this greater-than-expected impact on colligative properties was one main piece of evidence for ionic compounds separating into ions (increased electrical conductivity was another piece of evidence).

For example, when NaCl dissolves, it separates into two ions:

This means that a 1 M solution of NaCl actually has a net particle concentration of 2 M. The observed colligative property will then be twice as large as expected for a 1 M solution.

It is easy to incorporate this concept into our equations to calculate the respective colligative property. We define the van’t Hoff factor (i) as the number of particles each solute formula unit breaks apart into when it dissolves. Previously, we have always tacitly assumed that the van’t Hoff factor is simply 1. But for some ionic compounds, i is not 1, as shown in Table 10.5 "Ideal van’t Hoff Factors for Ionic Compounds".

The ideal van’t Hoff factor is equal to the number of ions that form when an ionic compound dissolves.

Revised equations to calculate the effect of ionization are then easily produced:

where all variables have been previously defined. To calculate vapor pressure depression according to Raoult’s law, the mole fraction of solvent particles must be recalculated to take into account the increased number of particles formed on ionization.