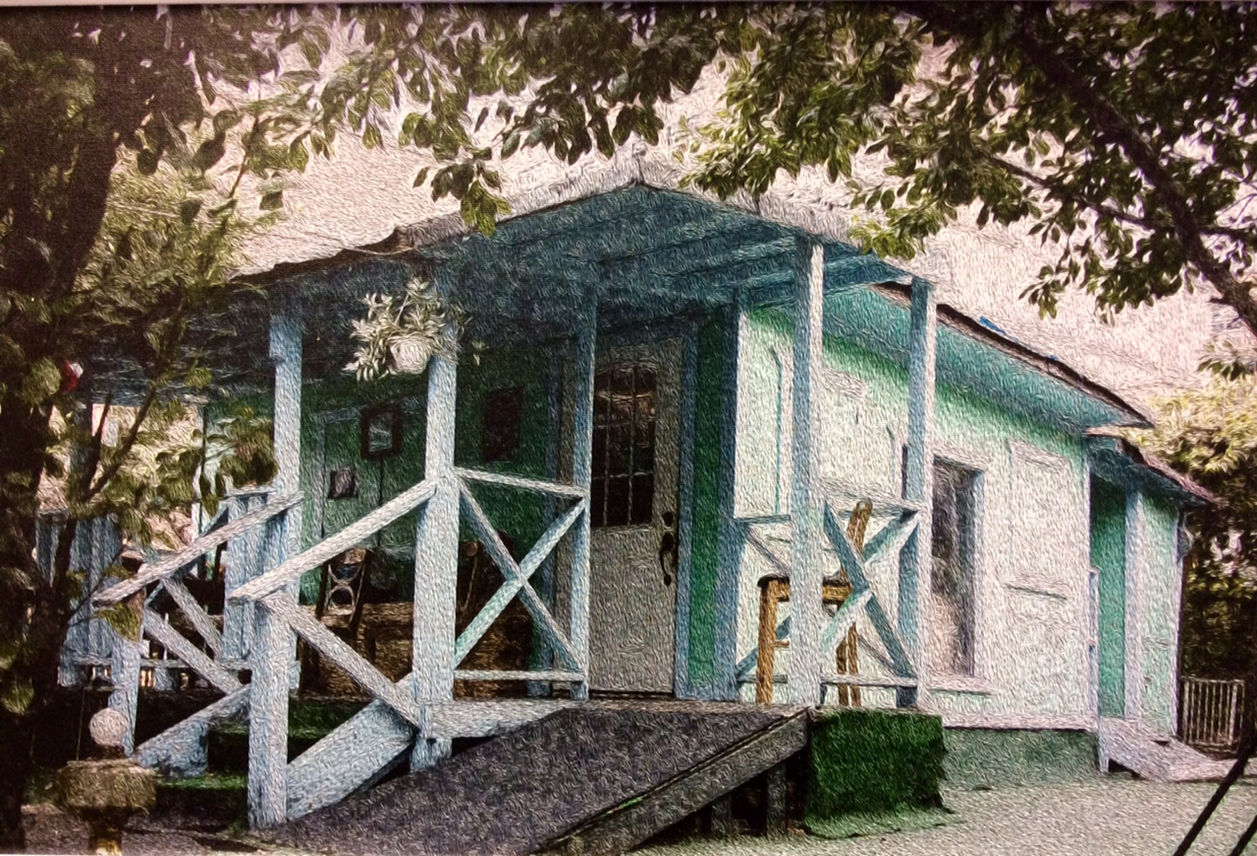 The collection consists of original materials from the 1991 exhibit curated and produced by Betti-Sue Hertz and Bill Aguado, both former associates of the Bronx Council on the Arts (BCA).  This exhibit was a collaboration honoring the little houses, better known as “Las Casitas” on the island of Puerto Rico.  The exhibit was mounted at the Smithsonian Institution in February of 1991 by BCA as part of the Longwood Arts Project.  The casitas are reproductions of working class homes and remain a vital expression of Afro-Puerto Rican culture in the diaspora.

Puerto Rican migrants came to NYC from Puerto Rico's countryside and bought with them aspects of “jíbaro” or peasant culture (Lemann, 1991) which are expressed within the Casitas. Casitas were based on the Taino (Caribbean Native Americans) thatched hut called a “bohío” (Sciorra, 1990). These one- or two- room houses with wooden porches, cross beams and wooden shutters laid in sharp contrast to the brick exteriors of tall buildings surrounding them and were meant to replicate the brightly colored ones of the rural Caribbean surrounded by small pastures with farm animals (Sciorra, 1990). They also defended neighborhoods by keeping out drug dealers and preventing other forms of illegal activities on the abandoned lots or served as shelter for homeless residents due to gentrification (Sciorra, 1991).  Casitas also symbolize the strong connection Puerto Rican New Yorkers have to their island roots.

The idea for an exhibition about casitas was initiated by Bronx Council of the Arts program director Betti-Sue Hertz. Hertz led a team of sociologists, anthropologists, urban planners, folklorists, and artists who contributed essays that became part of the exhibition and supported museum programming through panels (W. Aguado, personal communication, October 21, 2015). Their resumes can be found inside the boxes of curatorial files.

The exhibit exemplifies transformation of abandoned urban spaces into sites of cultural and historical memory.  Las casitas are the historical memory of the Caribbean and Puerto Rico in the Bronx.  The collection could be a useful resource for developing multi-cultural pedagogy. It is a chance for students to work collaboratively with archival material and create interpretive text. Additionally, this material could be useful for anyone creating a visitor’s guide of the neighborhood. The exhibition initially opened at the Smithsonian Institution in Washington, D.C.  It was also exhibited at the Bronx Museum of the Arts (BxMA) and Syracuse University.

After further research, the Smithsonian exhibit was developed by BCA’s Longwood Art Gallery, housed at Hostos, into “Las Casitas Revisited” to feature photographs by the renowned photographer Martha Cooper in 2010.  The collection includes photographs, found objects, video footage and musical instruments that reflect the history of one of the best known casitas, the beloved Casita de Chema (formerly called Rincon Criollo).  This exemplary casita is an important catalyst and incubator of Puerto Rican culture in New York City.  The centerpiece of the Las Casitas Revisited installation by William Aguado is a reproduction of a portion of Casita de Chema designed and installed by José “Chema” Soto, the casita’s founder and Juan Fernando Morales, the exhibition’s designer.

Mr. Aguado supported the Las Casitas exhibit in his role as Executive Director of BCA from 1978 through June 2011.  He continued to support this collection, even after retiring from his role at BCA by arranging for the Hostos Archives to serve as the permanent repository for these materials beginning in 2015.  After his role at BCA, Mr. Aguado became a member of the Board of Commissioners for the New York City Taxi and Limousine Commission (TLC), for a term that expires in 2022.  Aguado is known for his affinity for and devotion to the arts.  As part of the arts movement in the Bronx in the 1980s, he helped to highlight local culture in the Bronx during a time when the image of the Bronx was not altogether positive.

Ms. Hertz served as the curator for the exhibit in her role as Director of Development and Programs for BCA.  Ms. Hertz’s background in Art and Education coordination, as well as Executive Director Experience at Bronx River Art Center and Gallery made her contribution to the project invaluable. Since then she has been an Art Curator at Museums and Art Centers in California.  Ms. Hertz, in her role as curator of the exhibit, created the opportunity for casitas to travel and become better known, and her curatorial records reveal thorough planning and dedicated labor on behalf of Las Casitas in the form of numerous grant applications including many outreach efforts.

This collection helps to document the history of Puerto Rican culture with art and artifacts. Though not all of the feedback from the exhibit was positive, casitas are truly dynamic social and cultural spaces. The photographs and pieces of the exhibit together can lend to understanding the setting of this time in history. The exhibit also serves as evidence of the casitas phenomenon as it developed in the South Bronx.  In this way, the migration of Puerto Ricans and how they contributed to their community in NYC can be seen.  The exhibit also highlights Puerto Rican culture and its contribution to NYC history that can be seen in many ways throughout the Bronx.

Throughout the collection, gentrification that occurred in the Bronx can also be seen and understood.  Las Casitas were built on top of empty plots that arose throughout the Bronx as a result of unscrupulous landlords, many of whom would burn down their properties that they deemed unviable, in order to receive insurance money.  Las Casitas were meant to be cultural centers where community members could share with each other their memories of various towns on Island of Puerto Rico and similarly, the Caribbean.  Las Casitas can be viewed as a historical contribution of Puerto Rican culture in the form of vernacular architecture that can be seen throughout the Bronx.  In addition to serving as an important incubator of Puerto Rican culture, casitas are one of the most successful examples of the City’s urban greening and continue to gain unparalleled notoriety among (musical) practitioners of Puerto Rican bomba and plena traditions.  Casita’s greatest contribution to the cultural life of New York City has been in its role as a center for new talent and cultural expressions.  A large theme that can be understood is that amidst extreme economic tension for many Bronx residents, Las Casitas helped Puerto Rican community members come together.

The Casita Project, initiated by the Bronx Council on the Arts in 1987, was one of the new initiatives that came out of the desire to seek out artistic and cultural activities in the grassroots communities of the Bronx. The first iteration of the Casitas exhibit opened at BCA’s Longwood Gallery.  On February 1, 1991 “Las Casitas: An Urban Cultural Alternative” was one of several exhibitions that inaugurated the opening of the Smithsonian Institution’s new Experimental Gallery which was created to give museum professionals a “laboratory” to explore exhibition development, context and design, and marketing and accessibility strategies.  Las Casitas was included in the Experimental Gallery exhibition series in History and Material Culture.  Another exhibit on display at the same time under this series included “Project Face to Face” targeted toward local teenagers and college students.  It was an exhibition of life masks of people from all walks of life who have been diagnosed as HIV positive.  Under exhibitions in the Physical and Natural Sciences was one from the “National Air and Space Museum: Principles of Flight.”  The Air and Space Museum developed its first hands-on interactive exhibit gallery to help children understand how planes fly. There was also a series of exhibits under the title “Exhibitions in the Arts.”  One on display during at the same time as Las Casitas was Phillip Mallory Jones’s,“Harmattan.”  This was a multi-channel/audio, optical disc and computer installation which used African/diaspora traditions rhythms and symbols to compose narratives that were interpretable in various cultures and languages.  All of these took place in different areas of the Experimental Gallery, located in the Arts and Industries Building and closed on March 25, 1994 after presenting a total of 15 exhibitions.  Comments and reactions to Las Casitas can be found in the curatorial file labeled “Smithsonian Audience Comments.”